NOV 8-10
7:30 pm
MTA
​At a toasted subs franchise in the local mall, three up-and-coming “sandwich artists”—a teenager, a single mom, and a downsized refugee from corporate banking—are perfecting the mustard-to-cheese ratio according to the company manual. But when their shot at the American dream is interrupted by a series of strange events, they become unlikely allies in a post-recession world. AMERICAN HERO is a supersized dark comedy about life, liberty, and the pursuit of sandwiches. 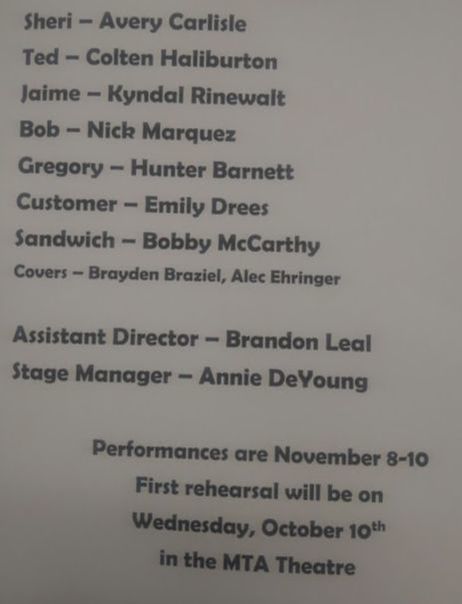 I had a brief meeting with our intrepid director Kelly Parker.  We decided on hunter green polo shirts for the employees with khaki pants.  Those have been ordered from Dickies for $110.   We had to order a new suit for Hunter who is playing Greg from Corporate.  It was supposed to be Sharkskin grey but they were out of stock on the pants so we ended up with blue instead.  The suit cost $70 and came from JC Penney's.  Jaime is supposed to have a sexy outfit that she wears into work but changes out of and into her work clothes. At first the director wanted to put her in leopard print, but I talked him out of it.  She's a 30 something mom with kids who's getting a divorce and going through a custody battle and is working a crap job to pay her lawyer.  She's not a 50 year old cougar trying to seduce a younger man.  The older man sees her and is seduced by what she considered normal clothes.  I had a discussion with my cosplay group and we all decided she'd be wearing a knockoff Juicy Couture track suit with platform glitter sneakers and a crop top.  It took some convincing, but I won the director over. I chose turquoise blue because that's what Britney Spears was so famously photographed in, and a peach top to exploit the complementary colors. I went with silver glitter tennis shoes because we didn't need them to be any brighter than they were already going to be in that small space.  Jaime's costume cost a total of $62.50 and all came from Amazon Prime.

We also bought name badges for the employees that will be a bright yellow background with black lettering but they haven't shown up yet and I'm beginning to doubt that they'll make it here at all.  They were supposed to be $6 each and we needed 4 which should have been $24 with no tax, but instead they wanted to charge us a one-time customer set up fee of $20 just to print 4 badges for a play.  We almost cancelled the order but then I asked so they cut the fee down to $10 so we ordered them. 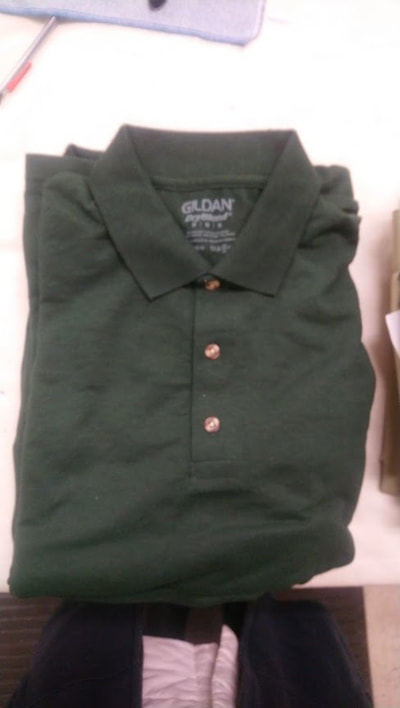 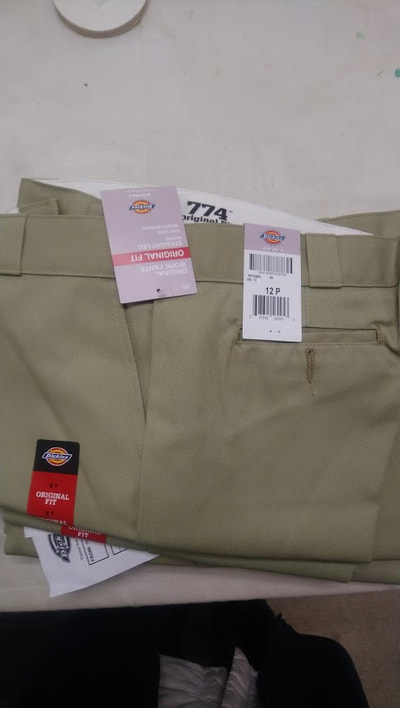 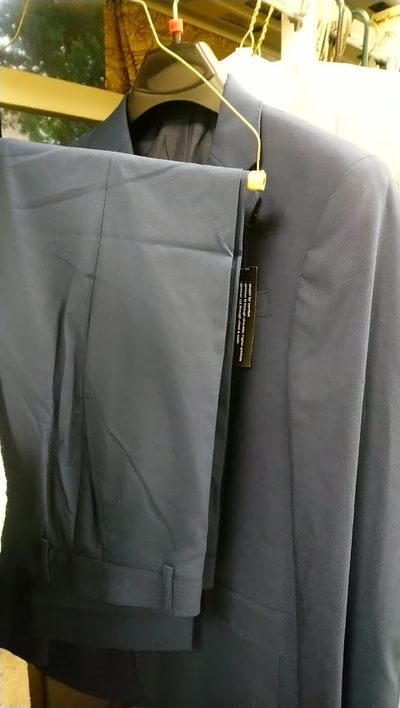 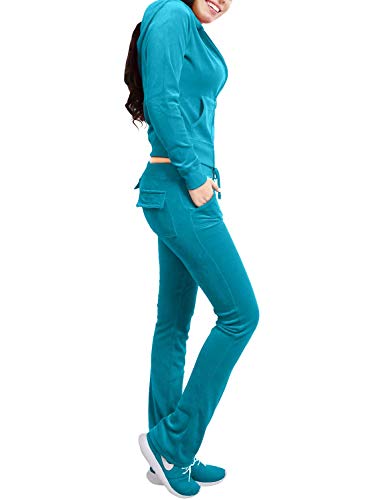 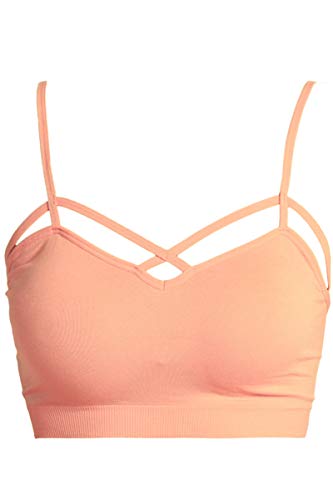 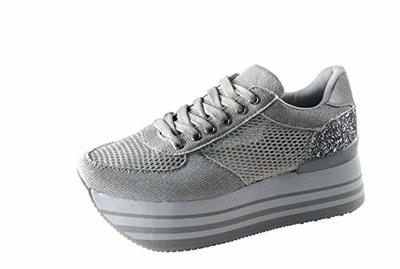 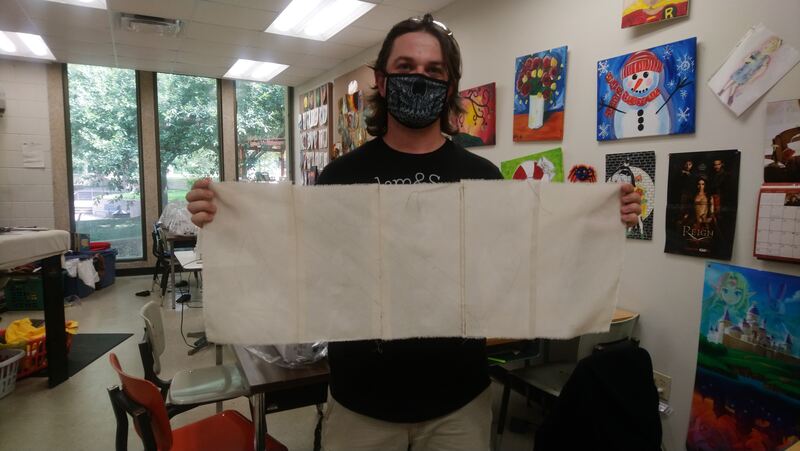 Brice Garcia is a third year student that I found at Geekfest in the costume contest and recruited with a full ride scholarship.  We put her cosplay skills to the test to make this silly sandwich costume.  I had a pink/brown unitard from a dryad character in the Tempest that we put on the actor inside the sandwich to be "meat" colored.  We ordered $200 in 6" foam for the bread and 2" foam for the ingredients. Brice used an electric carving knife to cut out the foam and shape it, then patterned the slip covers for each piece.  Next, she cut out armholes for the actor. Brice used our free broadcloth fabric to cover it in brown, and used red, yellow, and white for the veggies.  I didn't have any green or purple fabric, so she used the white fabric for the onions, lettuce, and pickle.   After the foam was covered she used acrylic paints to give the solid shapes more dimension and detail and more color.
Total spent: $476.50 (does not include dry cleaning) 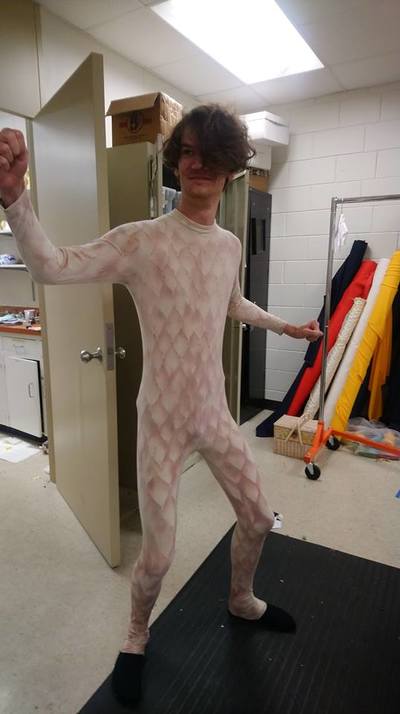 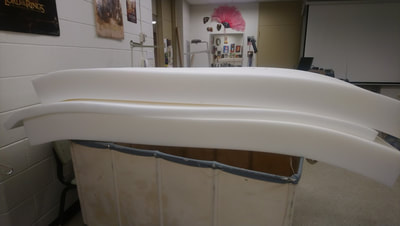 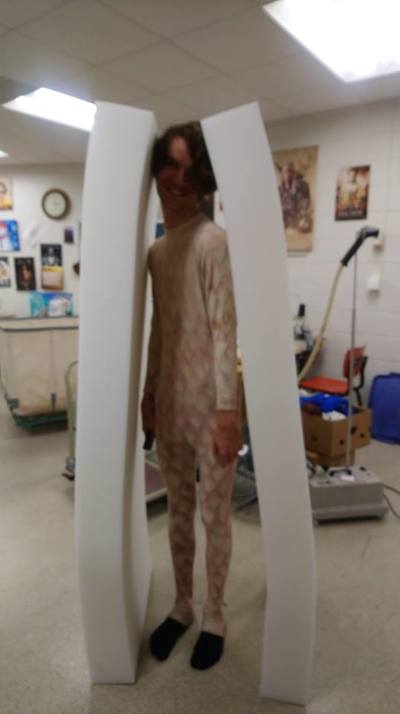 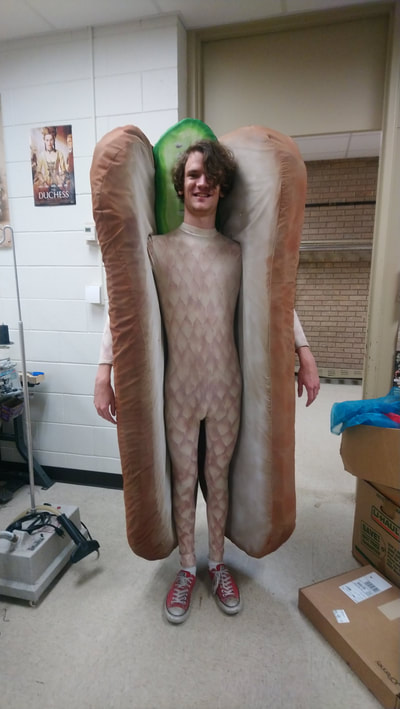