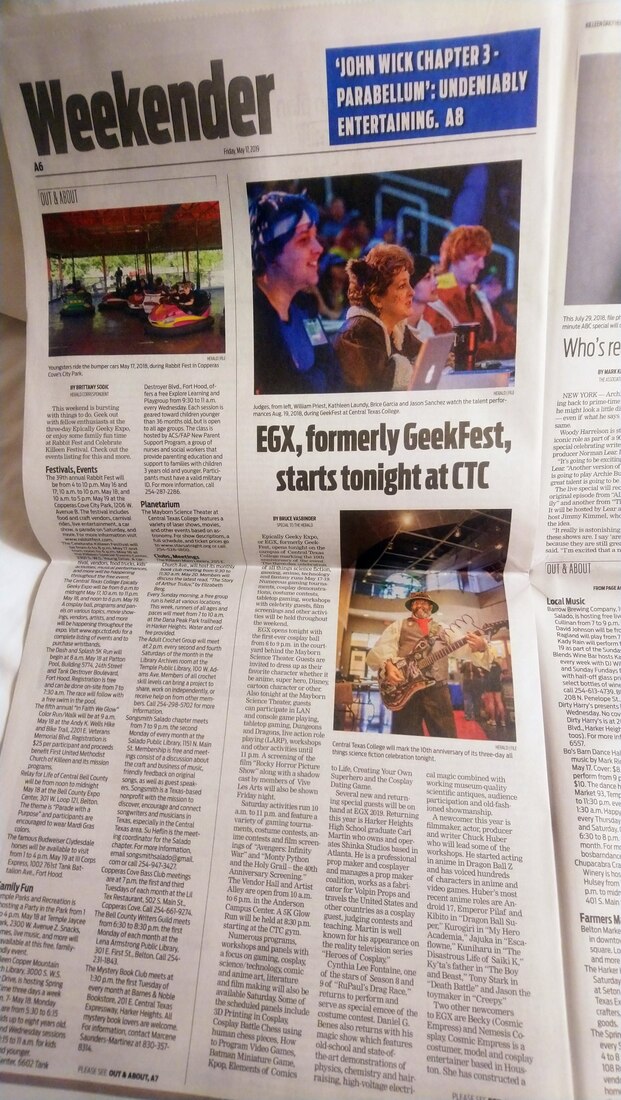 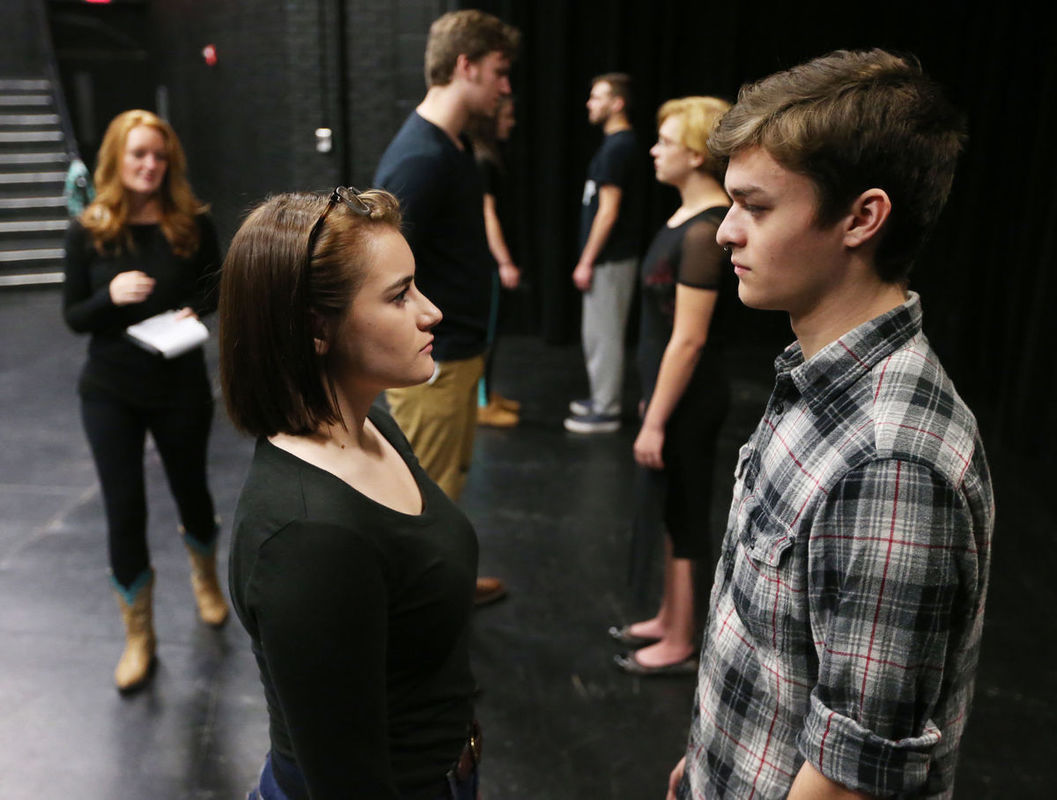 MCC students Alec Ehringer (right) and Hannah Young stand face to face during a theatre exercise as associate professor Elizabeth Talbot (left) supervises.
Staff photo--Rod Aydelotte
At a time when men in Hollywood and halls of power throughout the nation are being called to account for past sexual misconduct, McLennan Community College associate theater professor Elizabeth Talbot’s lessons about on-stage intimacy take on a new resonance.
In a recent exercise, six of her students paired off to explore various stages of platonic and romantic relationships through only gazes and physical touches. The most intimate touch in the exercise would be a hug, Talbot told the students up front, along with an important caveat: The students can stop participating at any time.
Talbot specializes in what she calls “Title IX for the theater,” guidelines designed to protect the safety of actors performing scenes with kissing, sex, rape or anything requiring heightened emotional vulnerability.
Specific direction, such as how to tilt heads during a kiss or where each finger will be while touching, is pivotal to the comfort of actors and success of any scene, as is with frequent communication, consent and understanding of context, she said.
Among the most recent allegations of sexual misconduct against powerful men is a Los Angeles radio broadcaster’s statement Thursday that Sen. Al Franken, D-Minnesota, forcibly kissed her while rehearsing a scene for a USO show in 2006, when Franken was a working comedian.
While many theaters are only armed with unwritten human resources policies, directors hold most of the power when workplace issues arise, Talbot said.
Abuse by a director was uncovered last year at the Profiles Theatre in Chicago, she said.
“The director was able to abuse that power really easily and affect so many people in different emotional states,” Talbot said.
MCC theater student Alec Ehringer said intimacy direction could prove especially useful to high school productions.
“There’s a lot of wanton kissing being done on stage that’s led by the kids, and it just isn’t being done in a context that is emotionally vulnerable,” Ehringer said.
The four pillars of intimacy direction — context, communication, consent and choreography — would clarify for young actors how to go about that process properly, he said.
Intimacy direction can use an intimacy scale: a one to 10 value marking the passion of the scene, and agreements on that value should be made, Talbot said.
Another student, Hannah Young, said there are warped societal expectations of college-age students that lead to uncomfortable situations on stage.
“There’s also this weird thing with our generation where there’s this pressure to feel OK with just kissing whoever, or acting with whoever, and not being allowed to be a person who is physically withdrawn or very closed off to people,” Young said. “It’s like, ‘You’re in college now, and you should be able to kiss whoever and do the scene and you’ll be fine.’ That’s a pressure that’s not always said but is felt.”
As the entertainment industry has been inundated with reports of sexual misconduct since alleged assaults by Hollywood producer Harvey Weinstein were made public, colleges and universities, including Baylor University, have also hastened in recent years to overhaul institutional responses to students who endure sexual violence.

Less sexual violenceTalbot said she believes widespread intimacy direction and related education could decrease the possibility of sexual violence.
“I have found that everyone is desperate to be safe on stage,” she said. “I haven’t had an experience where someone’s given me any kickback from it.”
While working in the United Kingdom, Talbot said a female actor noticed a male actor slowly moving his hand closer to her breast during a kiss scene as production continued. Because added pressure comes to actors who know how easily replaceable they are, instances like these must be corrected, she said.
There are signs of hope. The next generation of actors has less tolerance for shoddy direction of intimate scenes than their predecessors, she said.
“A lot of this has come out of millennials, which is brilliant because we’ve been telling millennials forever that they have rights,” Talbot said. “And now they’re going, yes, we actually do have rights. As a millennial myself I think it’s really important that those rights are heard.” 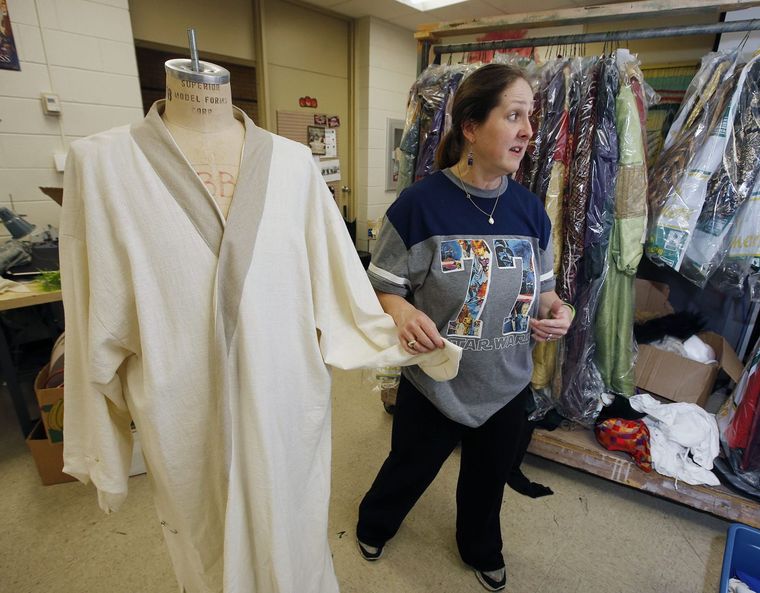 Comic conventions are places where people can be crazy together, said Kathleen Laundy, a McLennan Community College costume design professor.
“When you grow up worshiping something, even when you’re 40 or 50, it’s still appealing and you still wish you had an opportunity to be that character,” Laundy said. “So if you go to a comic con with a whole bunch of other crazy people who are all dressed up, then it’s a release so that you’re not embarrassed. You’re with your peers. You’re with your people. You’re all being crazy together.”
Laundy is a Waco cosplayer who designs costumes for herself and her family for festivals they attend year-round throughout the state.
And this weekend will be no different. Laundy, along with her three children and husband, will trek to the Heart Of Texas Comic Con sporting new “Star Wars: The Force Awakens” costumes.
HOT Comic Con kicks off Friday at 4 p.m. at the Extraco Events Center, 4601 Bosque Blvd. and continues Saturday from 11 a.m. to 6 p.m. and Sunday from 11 a.m. to 5 p.m.
Event organizers have brought back Baby, the Chevrolet Impala from “Supernatural,” because of its popularity last year and have expanded displays to include the “Jurassic Park” Jeeps and the Ecto-1D from “Ghostbusters,” complete with its own cosplay “Ghostbusters” crew, HOT Comic Con spokesman Clayton Afinowicz said.
Celebrity guests include Jim Cummings, the voice of numerous characters such as Winnie the Pooh, Tigger, and Darkwing Duck, and Claudia Wells, who played Jennifer Parker in “Back to the Future.”
About 100 artists and vendors will be present selling wares, and mock sword battles will be fought throughout the weekend.
Event organizers hope to reach the same number of attendees as 2015, which is about 9,000 people, Afinowicz said.
“We always expect bigger and better,” he said. “That’s what every con hopes to achieve.”
Personal connection
Laundy said attendees at the Waco event often come bedecked in costume, sporting characters from genres ranging from anime to science fiction and fantasy. Sometimes the wearers put their own spin on the costume, but, Laundy said, the reasons behind the chosen character are often deeply personal.
“You start talking to the kids who are dressed up . . . and you find out how very important that character is to them,” she said. “Like it got them through some rough time. It got them through a death. It got them through a breakup. Reading that comic book or going to see that movie is very internalized, very personal.”
> PHOTOS: Heart Of Texas Comic Con through the years
Laundy teaches costume design and stage makeup at MCC but only began participating in cosplay in 2013 when Peter Mayhew, who plays Chewbacca in five of the seven the Star Wars movies, came to a Killeen festival.
She had attended Renaissance fairs with her family in full garb but hadn’t branched out into other genres.
“We were like ‘We have to have costumes. We can’t just go,’ ” Laundy said. “So I printed out like the old T-shirt design — the images are still online — and printed it out on transfer paper and did our very own old-school transfer T-shirts like we used to actually own in the ’70s. . . . We got our pictures taken with Peter Mayhew and sort of after that we were kind of hooked. Like, this is a thing now. We have to go. We have to meet all our heroes. We have to dress up.”
Laundy said her family has gone as the crews from “Buffy the Vampire Slayer,” “Firefly” and the original “Star Wars.”
Afinowicz said the event provides an excellent family activity because the stories span generations.
Parents often bring their children and can introduce them to stories they grew up with, he said.
“The material marketed spans generations. If you look, things like ‘Transformers,’ ‘Stars Wars’ and ‘Teenage Mutant Ninja Turtles’ have made an epic comeback with the younger generations and those originated in the ’70s and ’80s,” Afinowicz said. “And parents get to enjoy those as well, so the whole family, it brings in.” 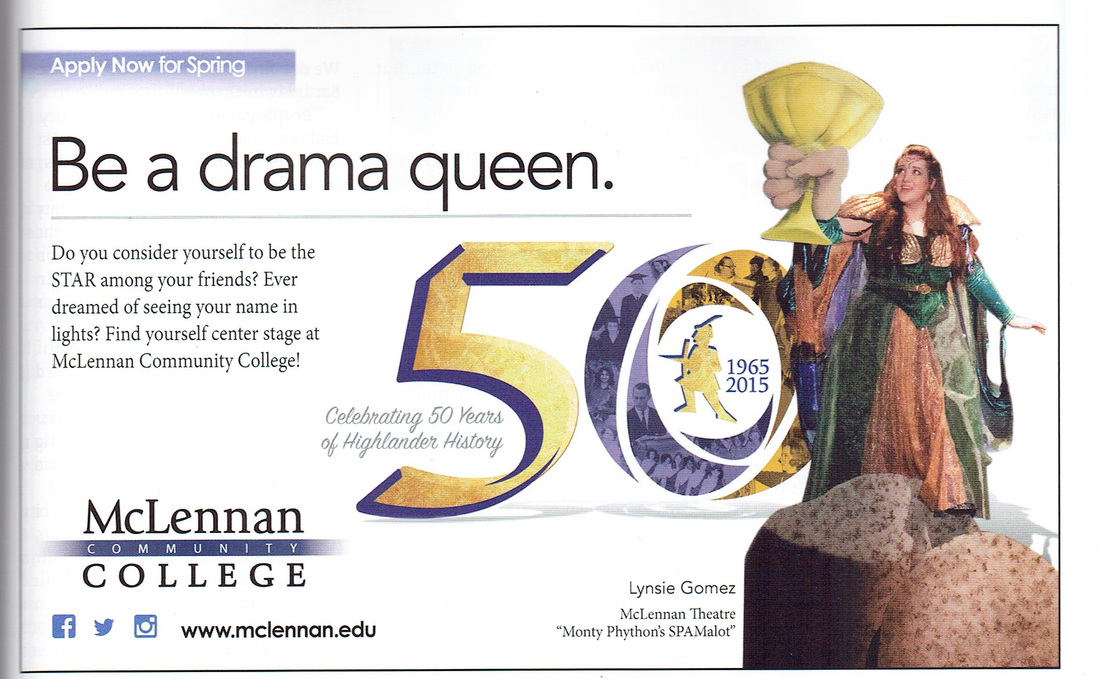 A Korean magazine contacted our scenic designer, Caleb Stroman, and asked him if they could publish his scenic designs for Spamalot in their magazine.  Naturally he said yes.  He's the article.  The name of the magazine in BOB.  I have no idea what that means in Korean, but hey! my Spamalot costumes are published in a magazine.  How awesome is that?! 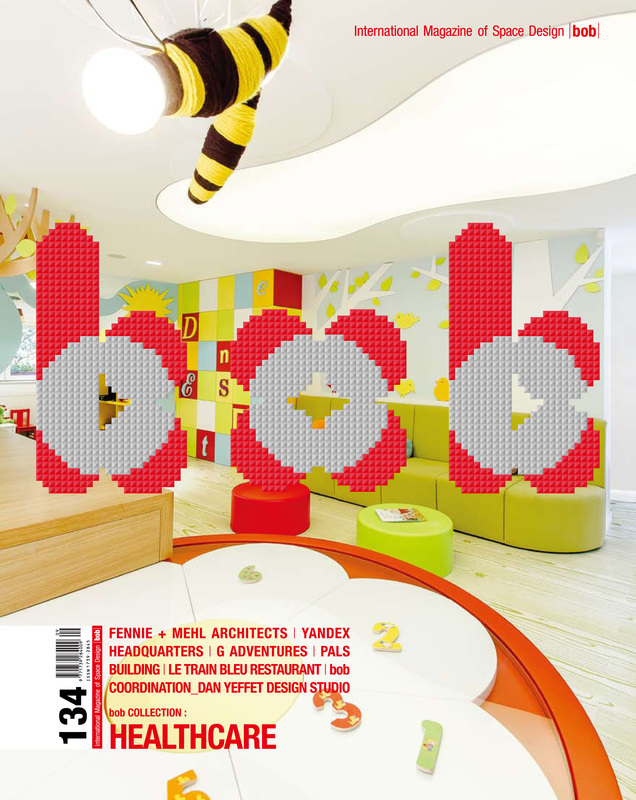 Back in May I was asked to be on the creative team for an ad campaign.  It was a joint venture between HOT Workforce Solutions, Waco Transit Authority, and McLennan College.  There was a need for buses to run at night to get 3rd shift workers and college students taking night classes, back home from their jobs/classes safely.  I climbed on board to help the team out.  This is what we came up with.  It took us a few weeks to brainstorm ideas, cast the characters, and do the shoot.  Then it took the ad agency (in California) MONTHS to get the final product back to Waco so that it could go live.  The ads are all over buses, billboards, and magazine pages.  We shot video as well and there's talk of more grant money coming in to turn the footage into commercials.  That would be awesome.  It was a great opportunity for me and our theatre students.  When I agreed to do this I thought I'd just be providing costumes.  I had no idea that I would be looked at as the "creative" member of the team.  I ended up holding a casting call for our students, coming up with the "surprising" characters, recruiting a hair and makeup stylist, and most importantly, being a major contributor to the concept.  I got paid for providing the costumes, which was awesome, but it was a lot more mental effort than I anticipated.  I'm not used to having to come up with "the script", I'm used to being given the script and going from there.  I don't see myself going into the ad business should I decide to change careers, but I am very proud of my contribution to this.  So thanks, Julie Talbert, for asking me to be on the team.
My Link Transit website 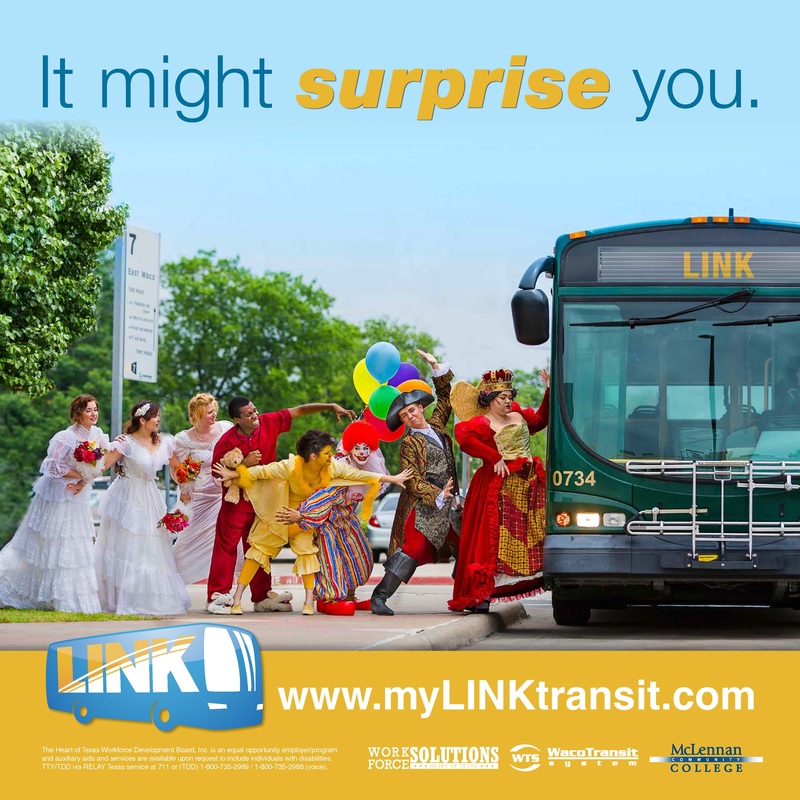 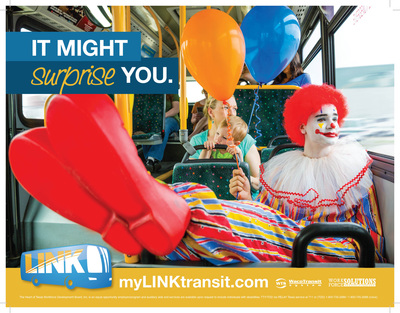 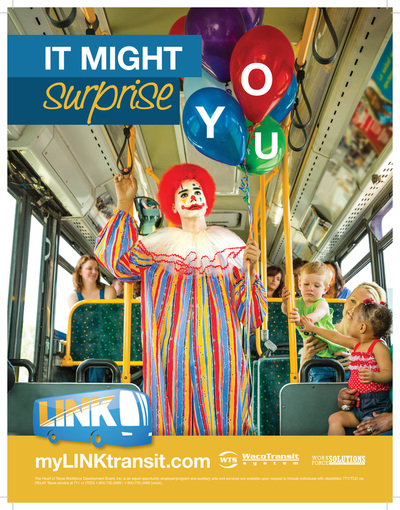 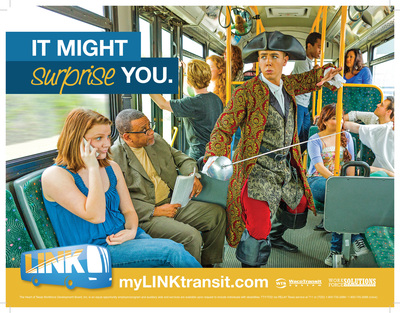 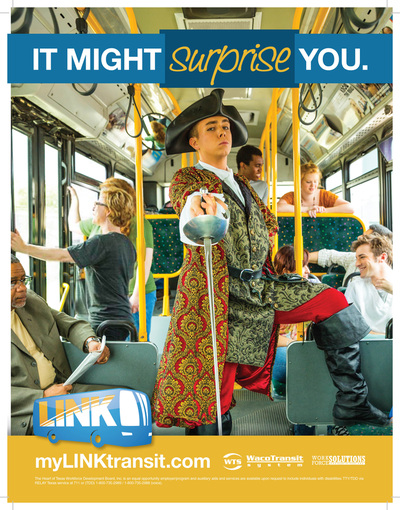 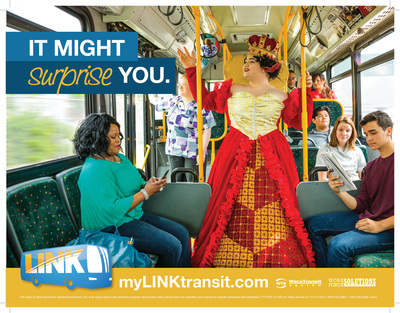 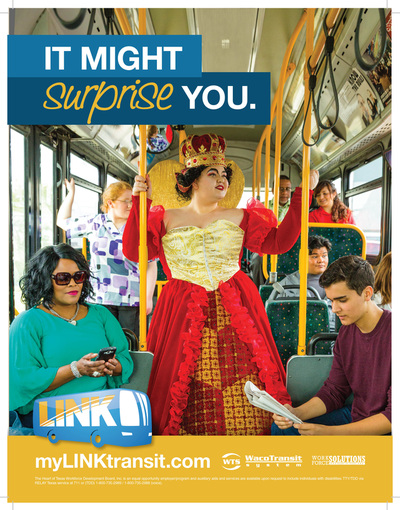 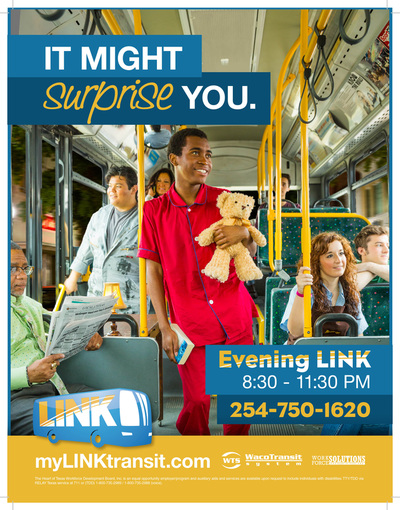 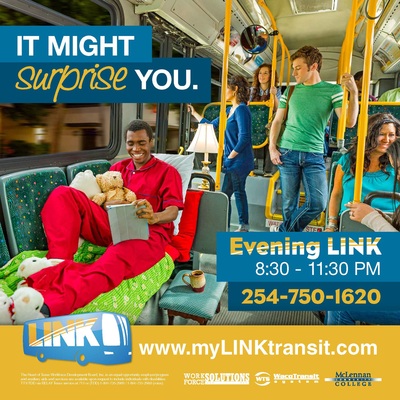 This story was Carl Hoover's idea.  He found out that I'd been busy working on my husband's band's image, doing wardrobe, photos, and press for them.   Press kits come across his desk every day and he thought to himself, "All these guys look the same".  We got to talking about it one day during an interview for an MCC show and this story idea was born. 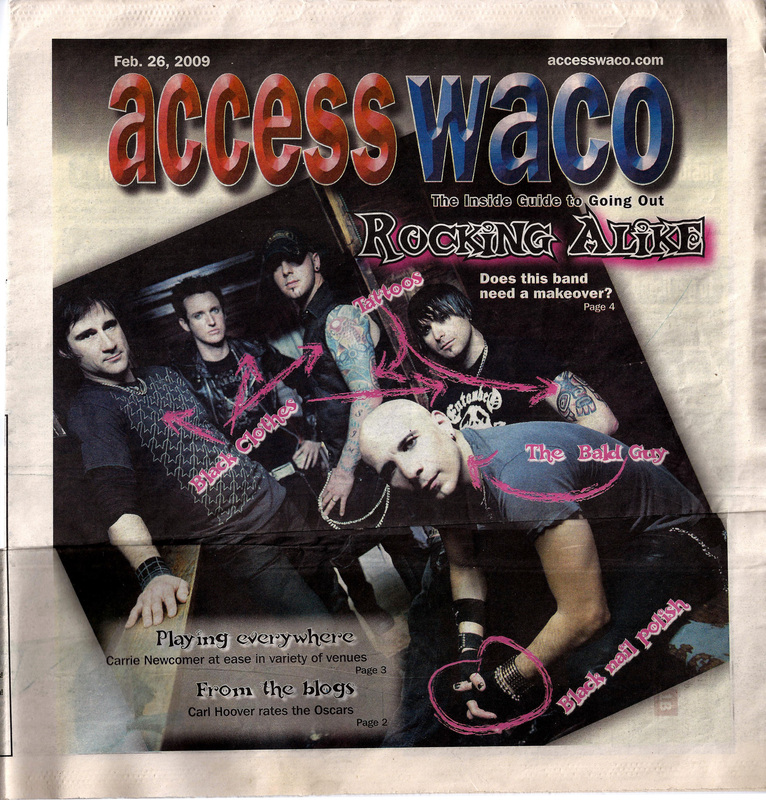 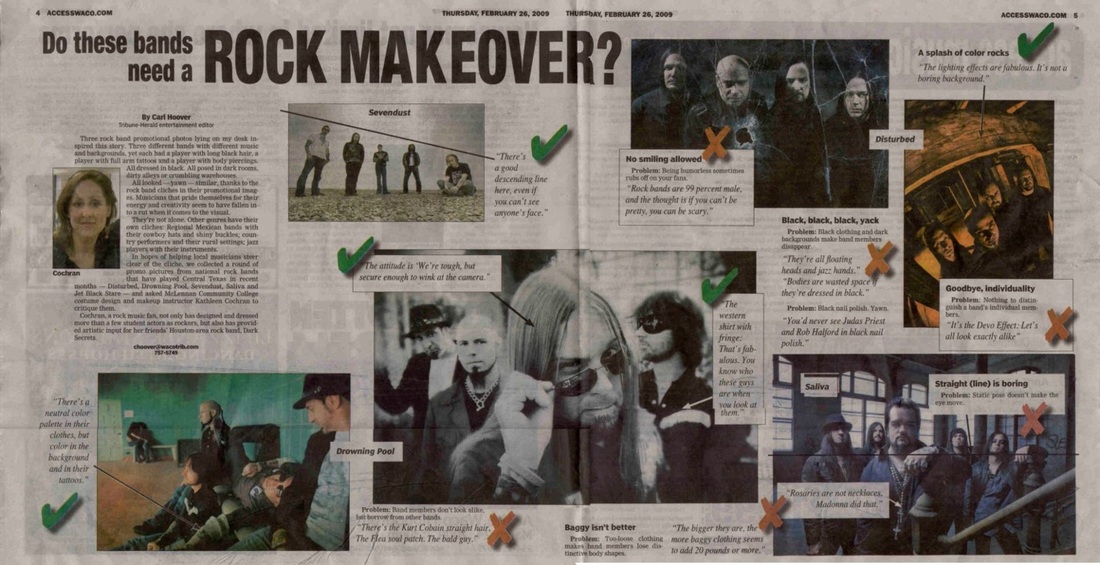 This was the first year of our Student Life Magazine.  I was told they were desperate for stories and would be interviewing various people on campus about their lifestyles.  I got volunteered. 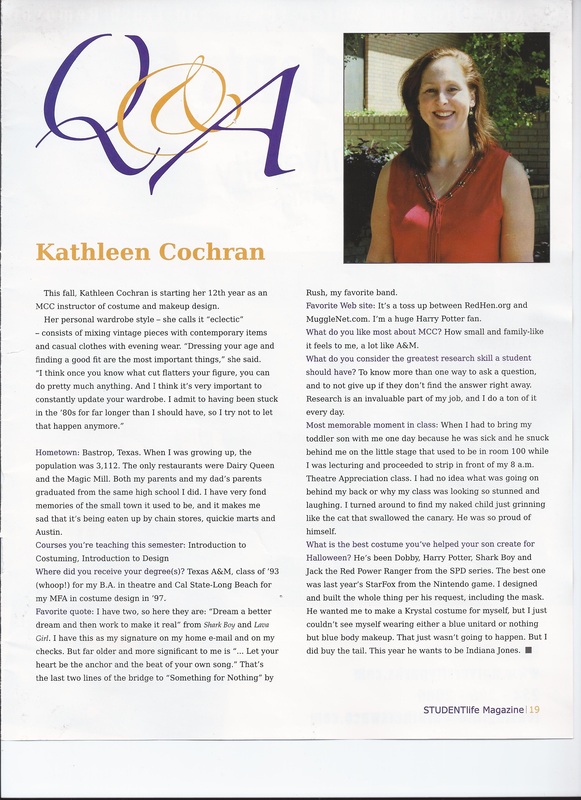 Carl Hoover always gets an interview with the director for his articles previewing our productions at McLennan.  When Carl came to get a story about Treasure Island  I had no idea it was going to be me doing all the talking that day.  I was a little overwhelmed, but I did manage to refrain from talking like a pirate during the interview...ARRRRGH! 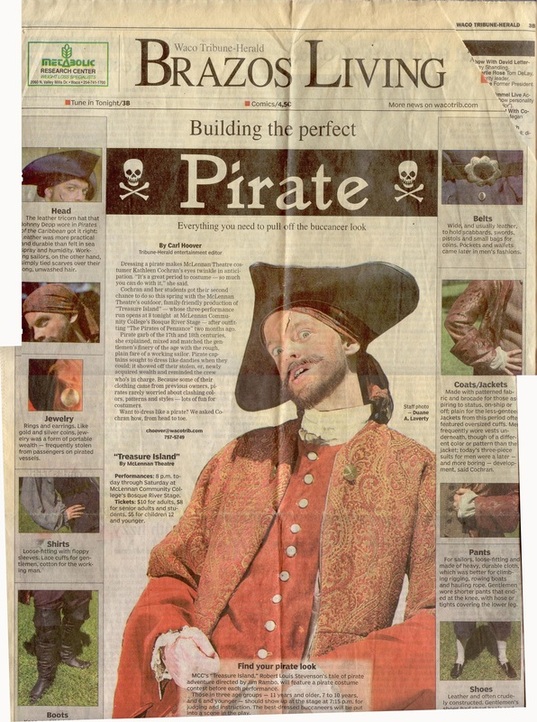 The Art Department has several galleries to fill up with exhibits throughout the year.  They thought that showcasing the design work of the theatre department would make an interesting exhibit to start off the year.  My brand new (back then) digital camera didn't do a great job of documenting my work.  My phone now takes better photos than this camera did.