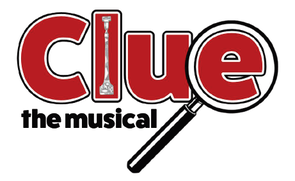 1/4/21
We had a zoom meeting.  Auditions are on Friday at 5pm at the PAC.  Actors will perform a 30 second comic monologue and then be taught a song. Mrs. White is written to be played by a man, as is Mr. Body, but Joe is open to casting either gender in both roles. Danile Ferris is the musical director.  Joe wants all of us at auditions. Scripts are not in yet, but we do have the rights.  We should get the scripts next week, but we won't get the score until after they get the check. The orchestra will be three players--piano, cello, and percussion. Currently we have no SM. The set will be one backdrop with modular furniture: three sets of tables with two chairs each that can be rearranged to form different room configurations. Joe and I went through my slideshow and likes all my ideas. We have to have the costumes done early so that we can take the photos of the suspects to make the giant cards.  Actors will wear body mics. Bronwen will be working with the soloists again.  We will continue with our same schedule for production meetings, on Mondays at 1pm.

I am buying all the costumes online with the exception of Mrs. White. Since a male was cast in the role, I am having to build the costume from scratch to accommodate his measurements. I was able to find several great sources for drag queen shoes, and shapewear so that we don't have to make it ourselves, like we did for Hairspray. I am also getting Mrs. White's wig from a drag queen store too.  I tried to order a cheaper one, but it was entirely too small for Charlie's head, so I went ahead and paid the big bucks for a wig made to fit men.  I got most of the things from Amazon, but the suits came from Mens USA. I included prices and the source for each piece on the slides.  I started shopping as soon as I got the cast list and most of the things I ordered arrived within the week (we have an Amazon Prime membership). I was worried that Miss Scarlet's dress, which was being shipped from New York, and Col. Mustard's tweed jacket, which was coming from the UK, were going to take the longest, but they arrived within the week as well.

1/28/21 We had another zoom meeting today.  The gala will be live-streamed by a professional company doing a three camera edit on the fly.  The other two performances will be broadcast on youtube.  The director wants to put the tech crew in costume as household staff, so there will be two maids and a butler. We are trying to get Mar/Com to take the photos of the suspects for the giant cards.  We're going to set that up for next Friday. All the fittings have been done and we are working on the few alterations that we have to do. I have more things coming in the mail this weekend.

2-1 The rest of the things showed up this weekend.  Joe wants to use the feather fans from Chicago for one of the musical numbers. Mrs. White's costume is almost finished, I just have to go buy a black zipper to put in. The clear masks that we bought to try that are supposed to be anti-fog still fogged up on several of the cast members, so Joe asked for regular masks, in the color palette of each character.  Those were ordered and arrived Sunday.

2-8 The rest of Col. Mustard's things showed up today: his yellow plaid shirt, gold tie, and shooting socks.  Garland came in for a fitting and the size 11 boots fit just fine, which made both of us happy. I had to hem his jacket sleeves but that was it.  I still have to hem Emmett's jacket sleeves and dye the two sets of feather fans green and gold, but then I'm done.  We're taking the photos for the suspect cards tomorrow.

2-9 MCC cancelled classes today due to inclement weather.  The photos have been rescheduled for next Tuesday at 5.

Snowpacolypse wiped out the next 10 days of rehearsal.  The play was rescheduled for the first weekend in March. The photos were taken the Monday we got back to school. It took three days but I got the white feather fans dyed, dried, fluffed, and fancied up.

Mrs. White is written to be cast with a man in the Panto Dame tradition.  The actor is a large man and I wasn't able to get a maid uniform in his size, so I knew basically from the start that I'd have to build this costume from scratch.  I started from the inside out and bought a ton of shapewear from two Trans/Drag Queen store, Dress Tech and Shoe Cup, as well as Amazon:  a boned waist cincher, DD bra with pockets, foam boobs, hips, and butt, two pairs of compression tights,  Mary Jane shoes with a 3" heel, and a white wig.  The cost of turning a man's body into a women's body was four times as expensive as the actual cost of the costume: 5 yards of stiff black satin, and a zipper. I used a vintage vogue pattern in a plus size.  I still had to size it up to fit the actor. I also moved the closure to the CB and eliminated the overlapping double breasted detail on the front of the bodice to simplify the silhouette.  I added a white collar and cuffs to the dress and made a white apron out of the same satin. The hair accessory came from Amazon. 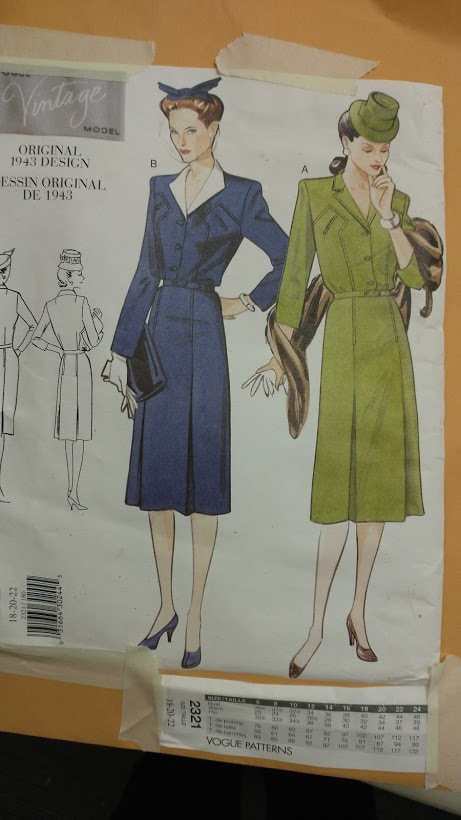 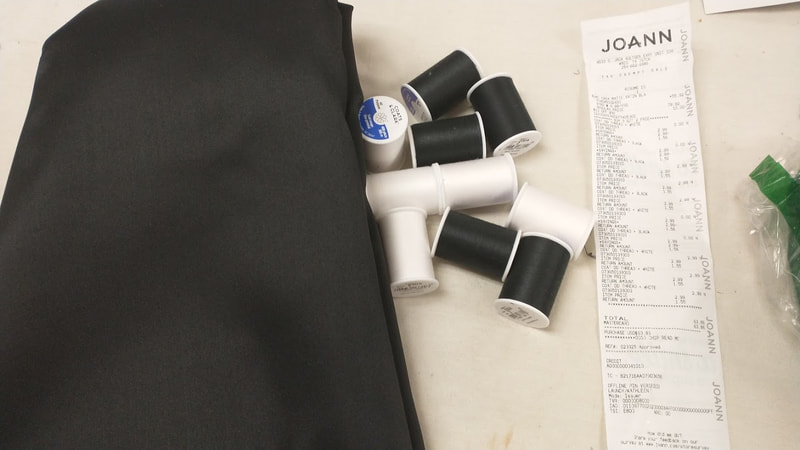 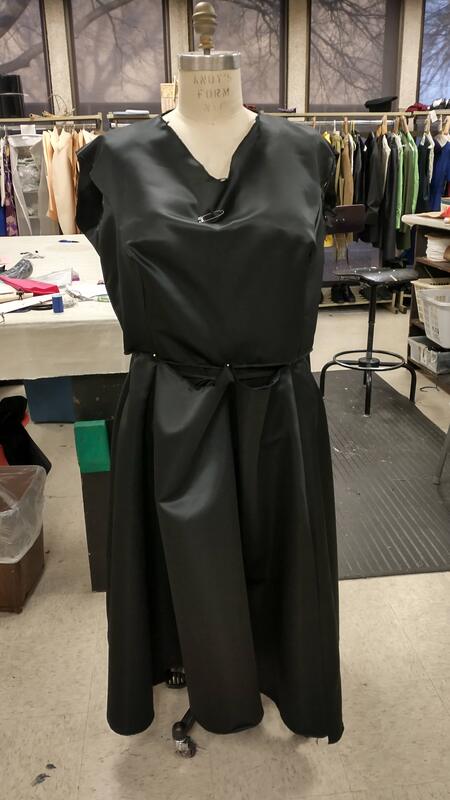 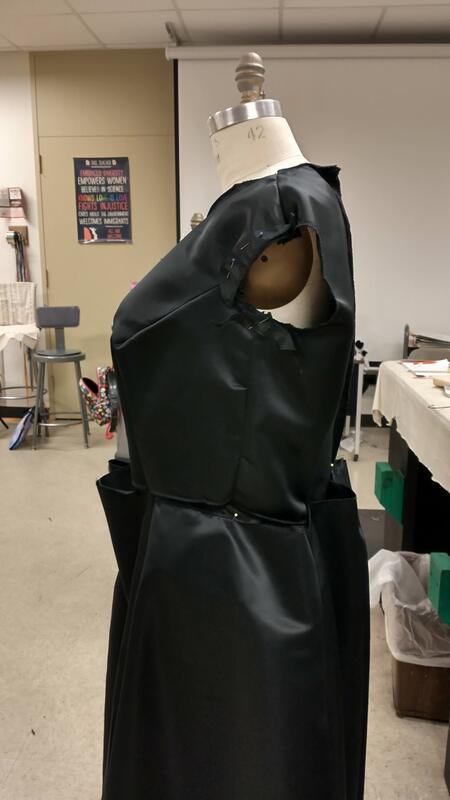 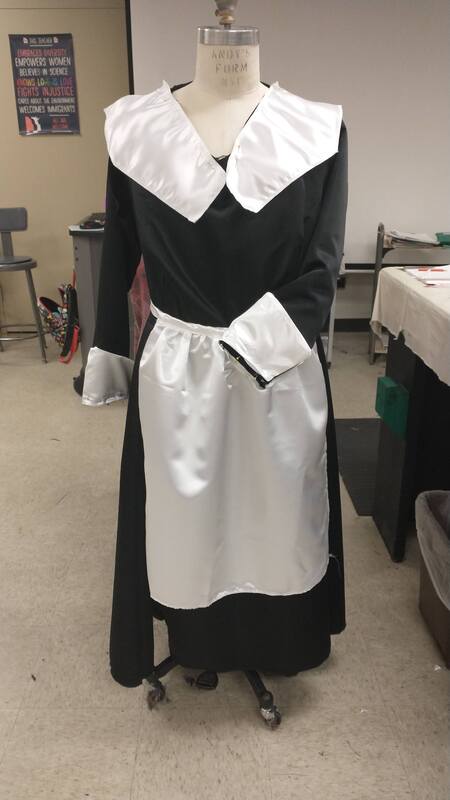 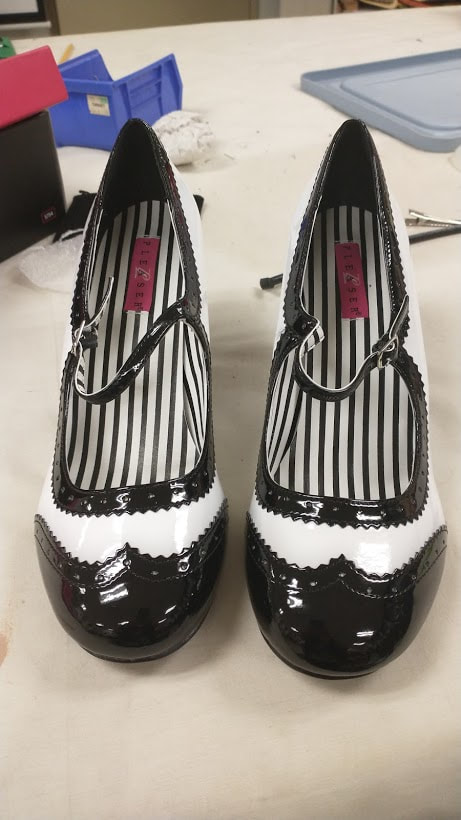 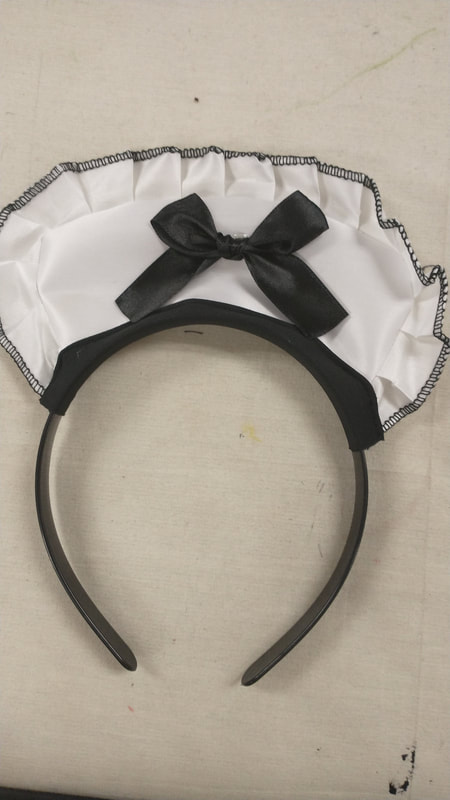 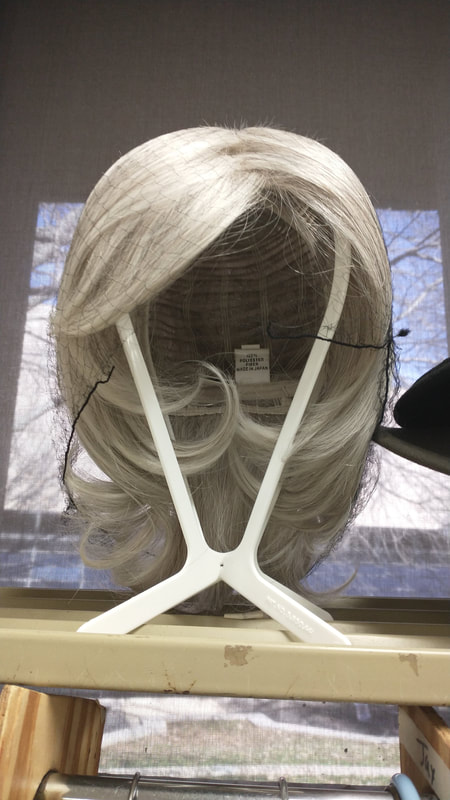 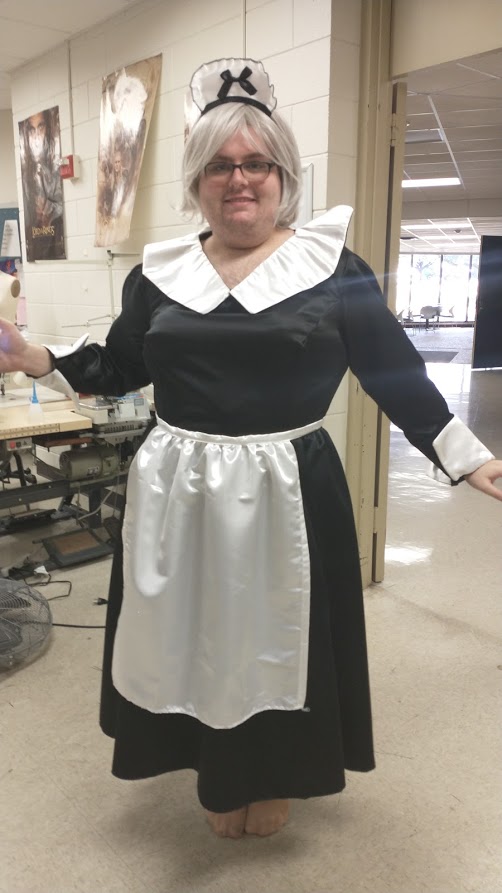 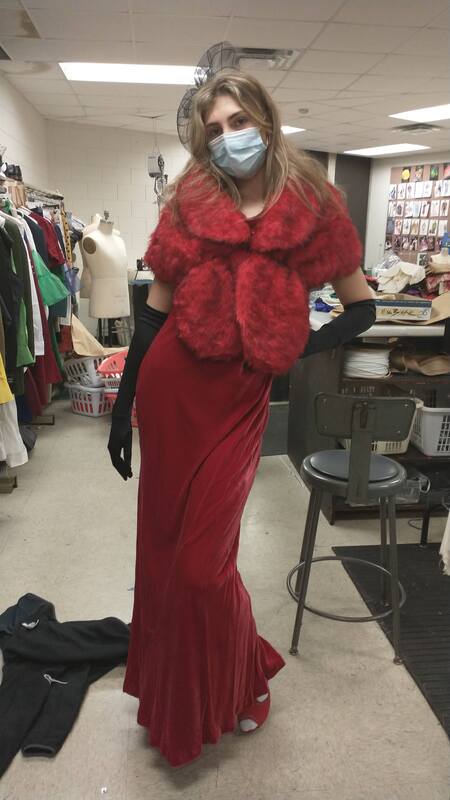 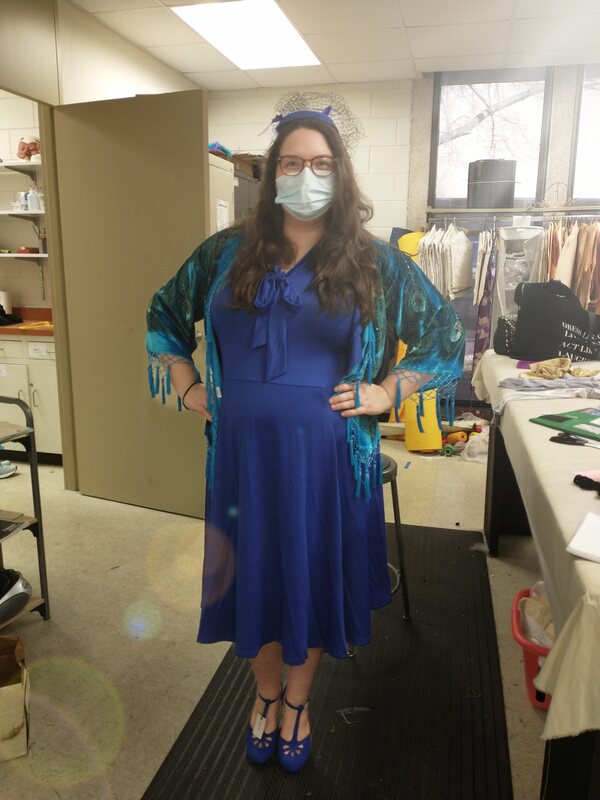 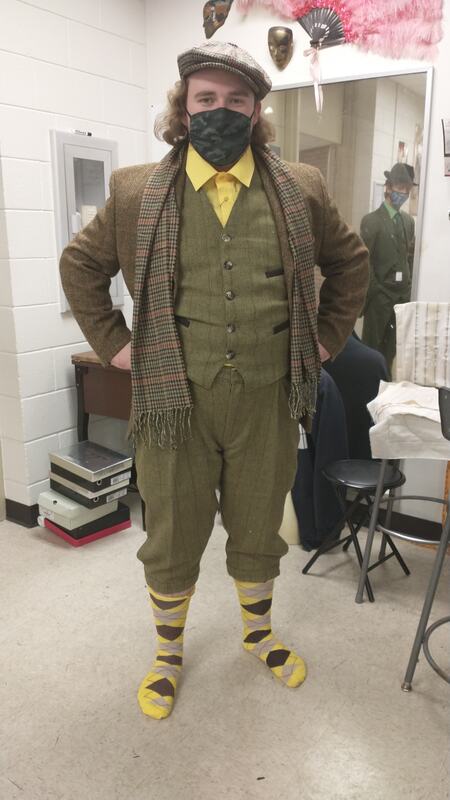 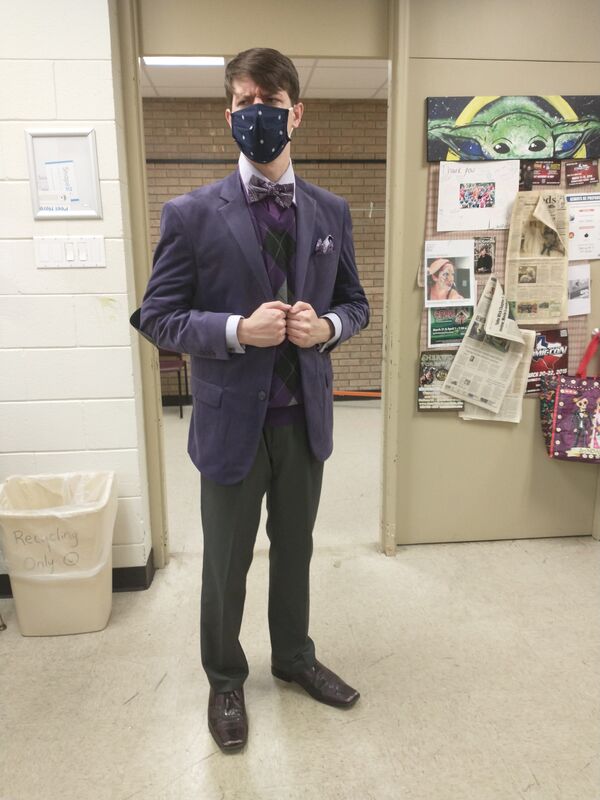 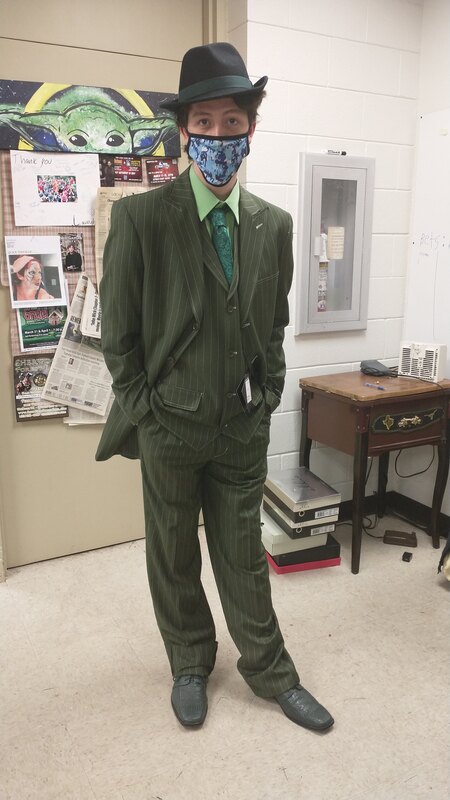 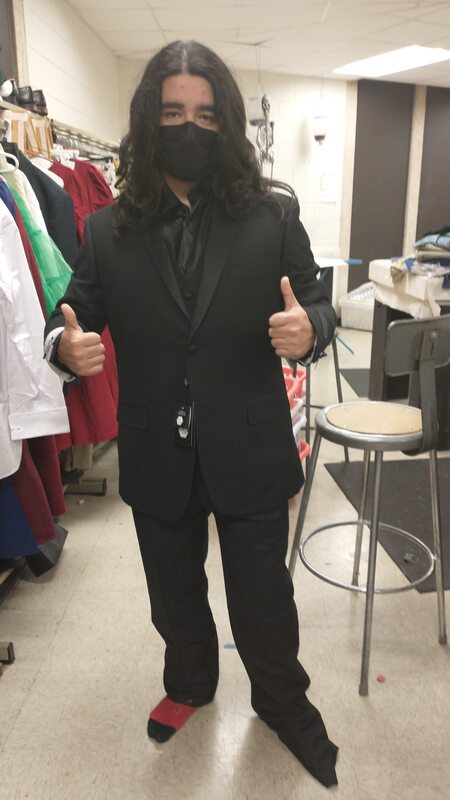 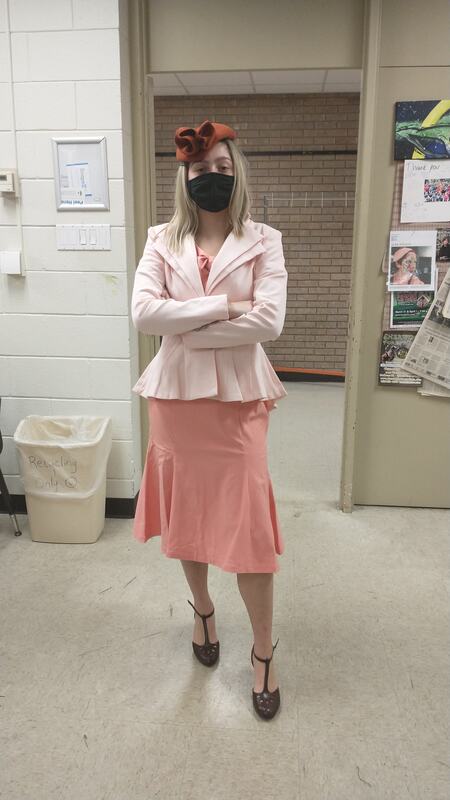 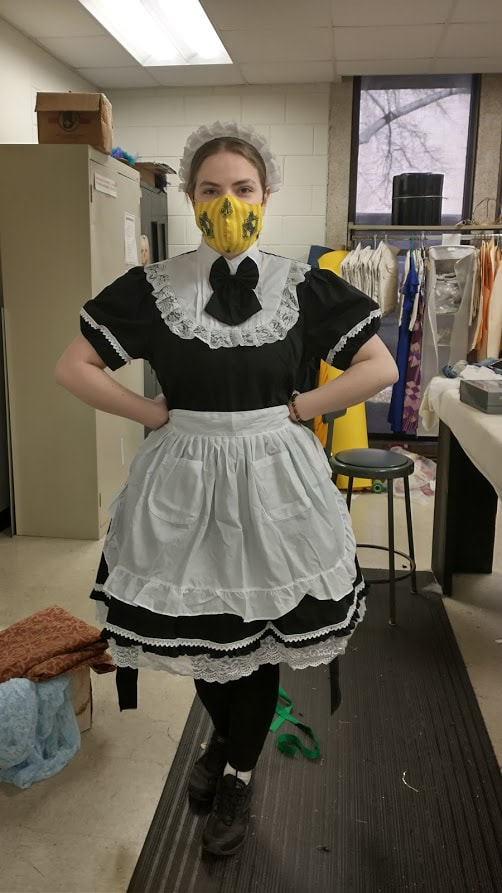 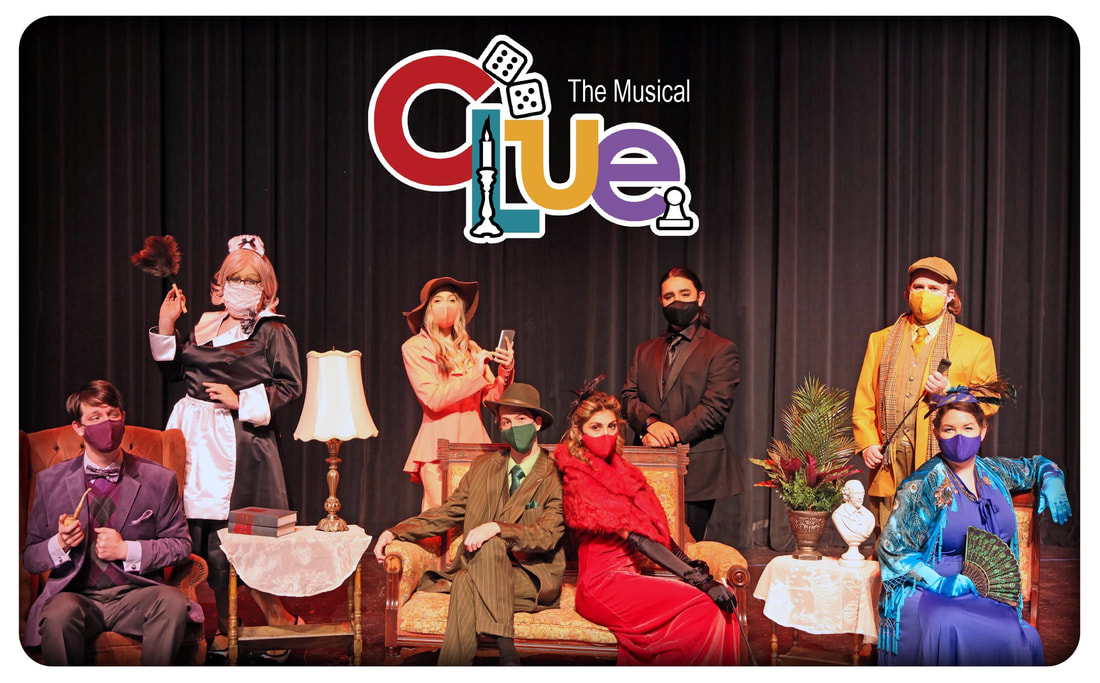 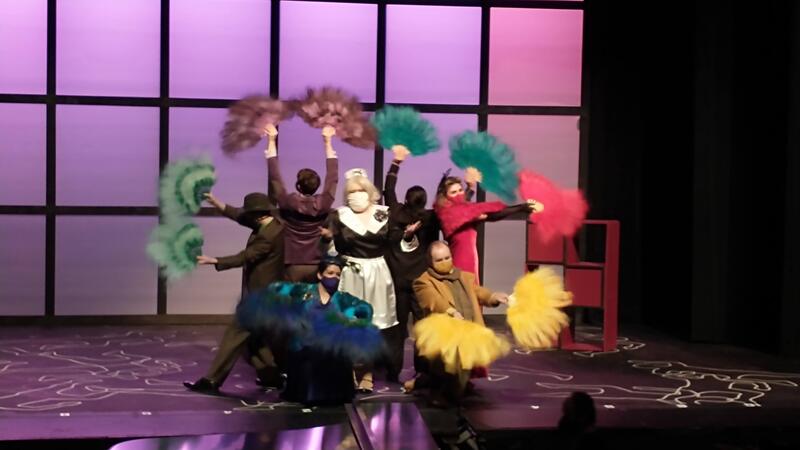 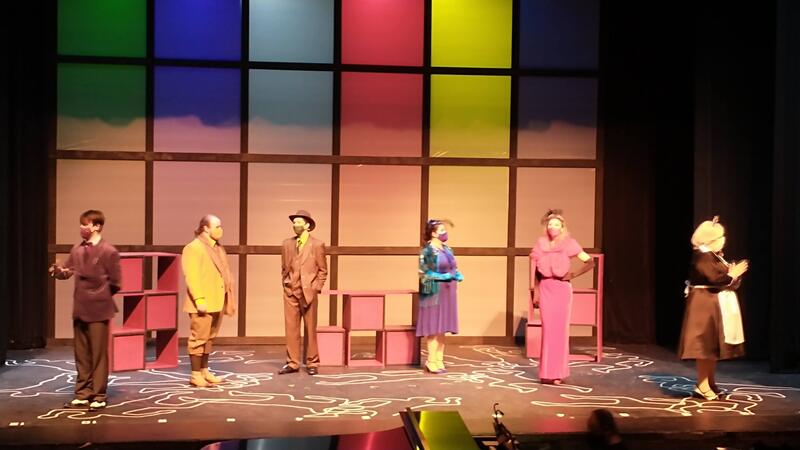 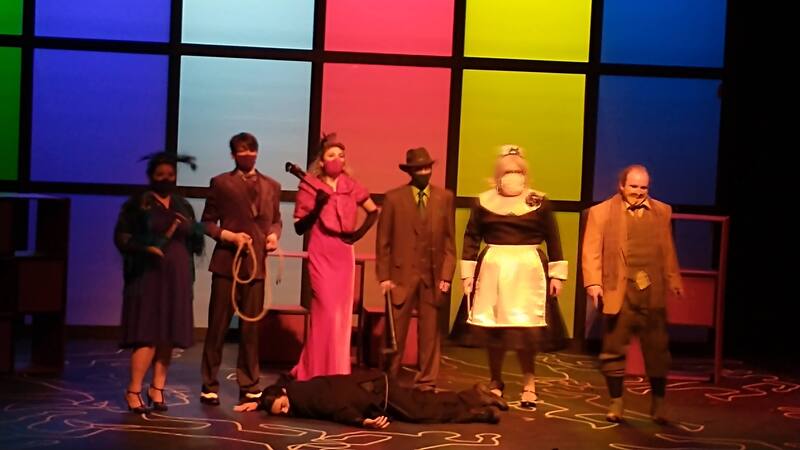 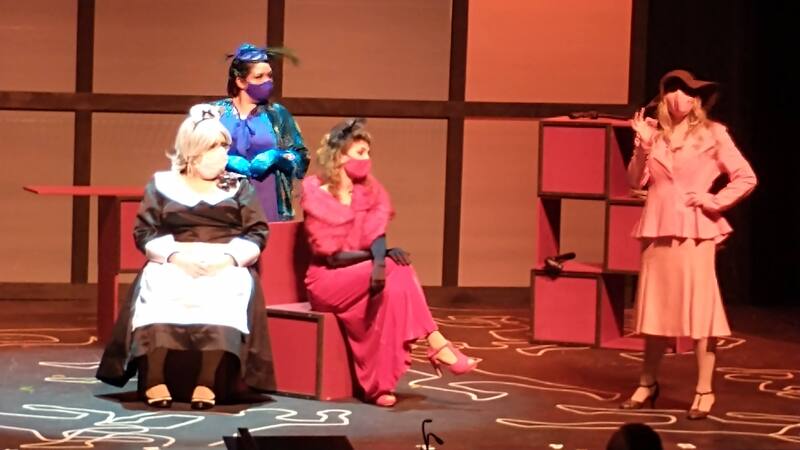 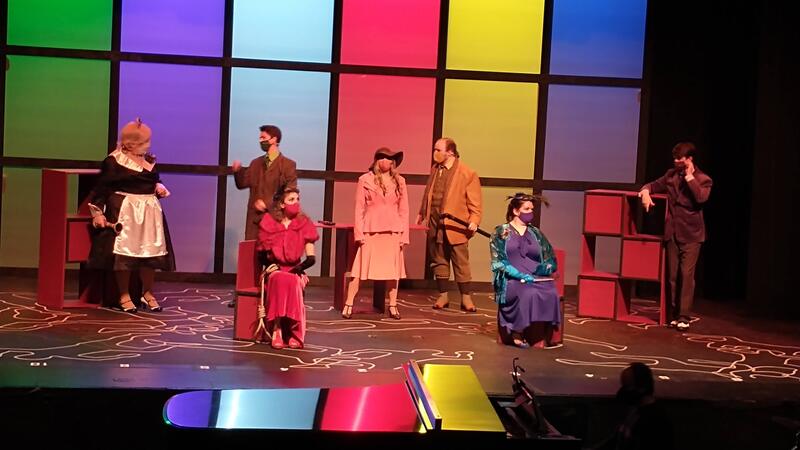 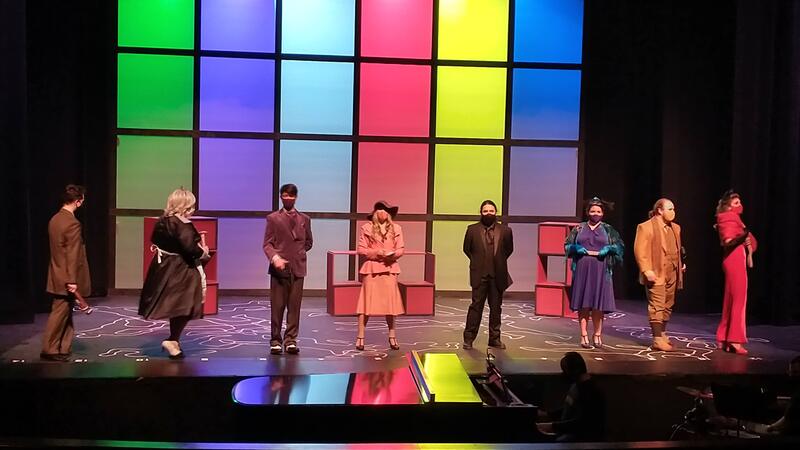