By CARL HOOVER choover@wacotrib.com
​
Those who like tidy solutions with clear-cut distinctions between truth and half-truth may want to take a closer look at the title of McLennan Theatre’s season-closer: “Doubt: A Parable.”
The 2004 John Patrick Shanley drama plays truth close to the vest — or perhaps clerical vestment — in its account of a New York priest accused of impropriety with a young student, and that’s the point, said director Kelly Parker: Just what is the truth where there’s no hard proof to confirm one side or the other?
Given the global scandal of the Catholic Church covering up for sexually abusive priests, one most recently touched on in the Oscar-winning film “Spotlight,” audiences may think the Pulitzer Prize-winning “Doubt” revisits the same territory. The question of “Doubt,” and for its audiences, isn’t how something that happened was handled, but whether something has happened at all.
“We’re not trying to solve the Catholic priest problem with this play,” he said. “It’s more like what should you do with gossip, where there’s the idea of something, but there’s no proof of anything.”
The something in “Doubt,” set in 1964 New York, is an accusation by Sister Aloysius Beauvier (Lauren Hill), principal of St. Nicholas Church School, that Father Brendan Flynn (Joshua Purvis), a popular instructor at St. Nicholas, has done something improper with a student. Her charge stems from a report from nun Sister James (Kaitlin Riley) that Flynn had met privately, and suspiciously, with Muller in his office.
Flynn insists the meeting was a matter of disciplining the student for a minor infraction without embarrassing him before the school, but Sister Aloysius doesn’t believe him.
The incident soon expands to include the boy’s mother (Jayla Lane) and questions of Flynn’s past as the principal refuses to let the matter drop. The play’s dramatic revelations, however, don’t shed light on what the truth is, but raise even more questions.
Shanley’s script keeps audiences guessing. “It’s a great script — so tight and to the point,” Parker said. “It’s complex and bold, yet subtle and nuanced at the same time.”
The trick for Parker’s cast is to keep from influencing viewers’ perception of guilt or innocence by shading, intentionally or not, their performances. “How we portray these characters is going to play a part in influencing the audience,” the director said. “What we’re trying to do is leave that for the audience to determine.”
In contrast with McLennan Theatre’s relatively large-scale musical “Once Upon a Mattress,” “Doubt” goes small with a four-member cast, staging in the more intimate Music and Theatre Arts Theater and a running time of less than 90 minutes.
Research on the Sisters of Charity, Catholic Liturgical Vestments, and fashions that were worn to church by African American women in the 1960's.

We had two weeks in between Magic Flute and this show's opening.  Unfortunately, I ended up with bronchitis and couldn't even make it to the last show of Magic Flute.  I was home sick for a week afterwards and no work got done on Doubt until Sunday when I went thrifting for a 1960's dress that would fit Jayla and grey sweats for Josh.  I visited all four Goodwills in Waco but there were no sweats to be found anywhere, clearly Spring merchandise had cleared out all the workout wear.  Also, no plus sized women's suits.  Target fortunately had clearance sweats for $3.00 and a faux 60's dress for $32.  It's poly so I'll have to dye it and the tights.  Fabric shopping was no easier.  Joanne's did not have an appropriately heavy weight green satin, but going out of business Hancock's did for $7.00.  We now have a week to make two chausables for Josh, two nun dresses, hats, and capes for the girls and to dye a dress and tights for Jayla.

Monday morning I patterned and cut both nun dresses and chausables.  That afternoon I patterned and cut the hats and capes.  Work progressed steadily and everything was finished by Thursday lunch with the exception of Jayla's fitting.  She came in Thursday afternoon and we discovered that although the dress did fit her, it was way too short for her long legs and especially for her scene in which she was seated most of the time.  So it's up to me this weekend to go find her a longer 60's dress and hopefully in a dark color that I don't have to dye. 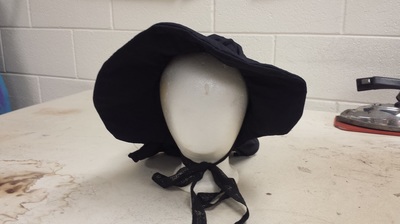 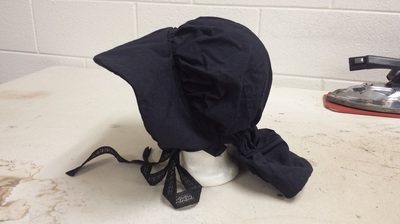 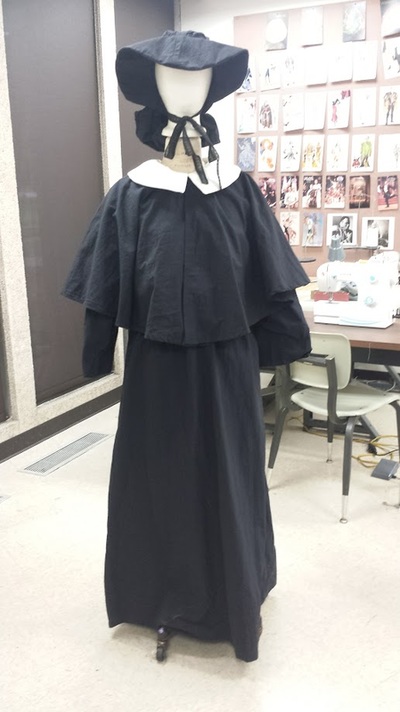 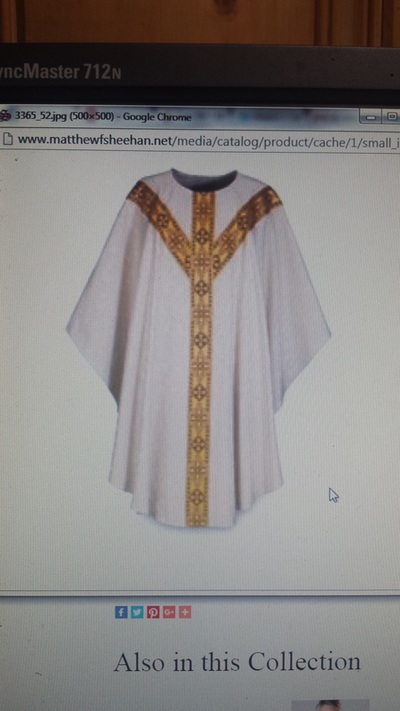 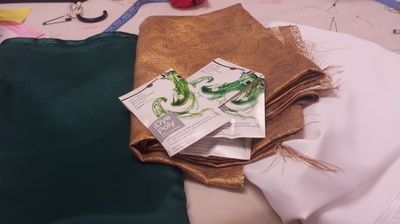 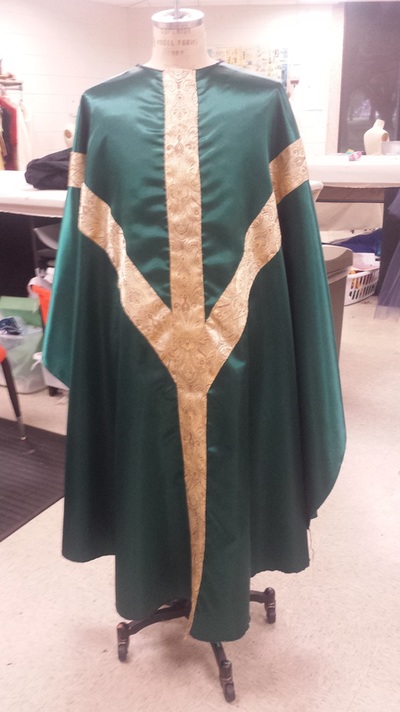 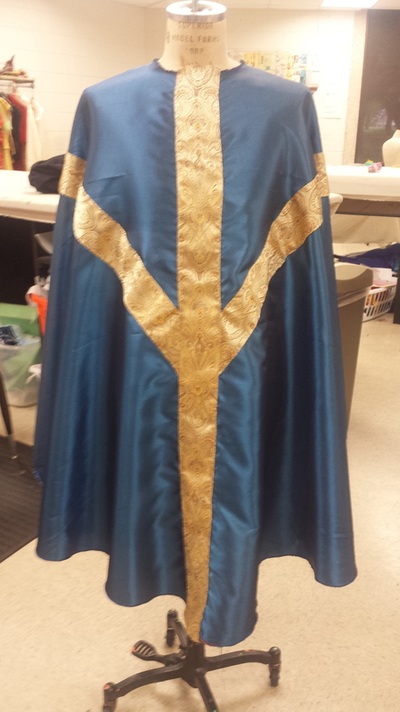 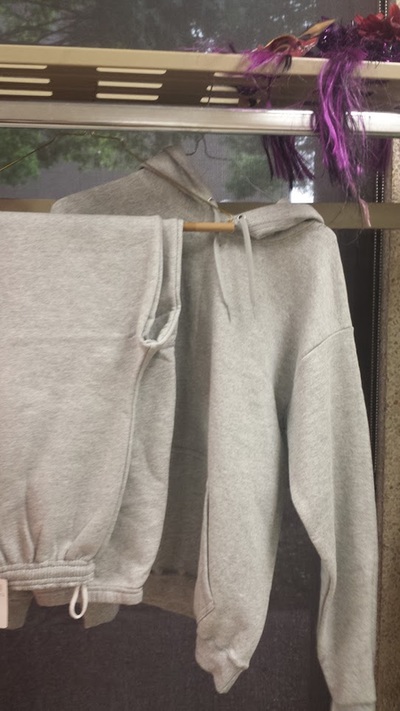 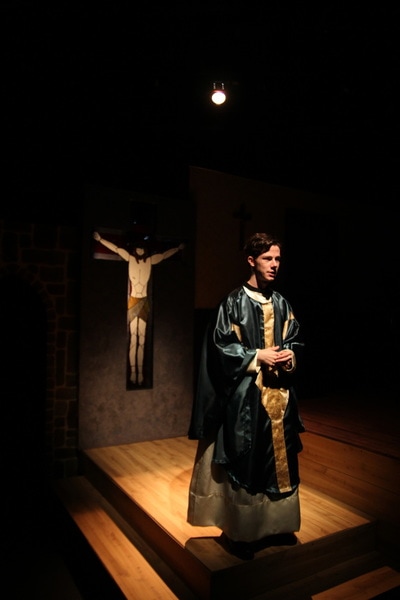 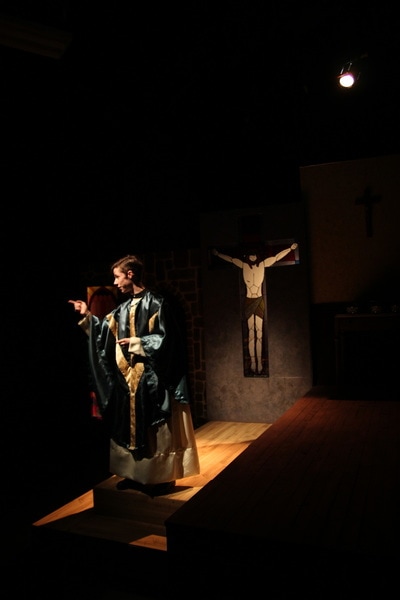 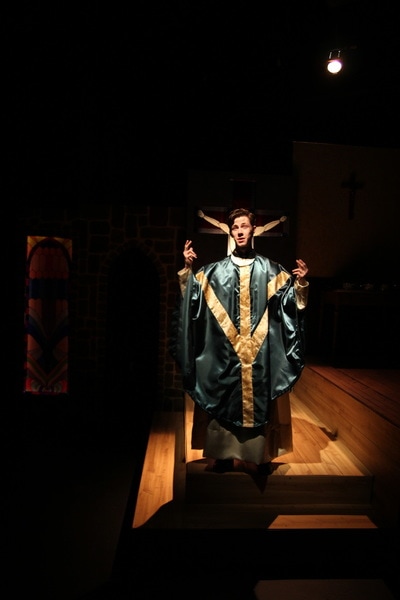 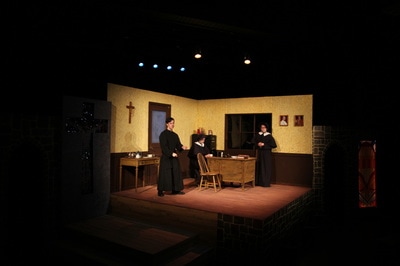 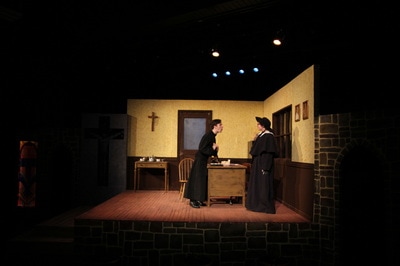 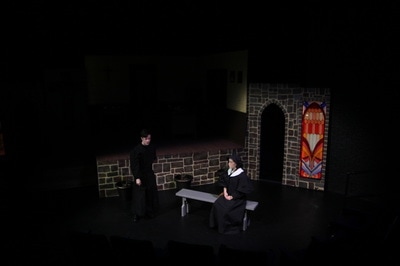 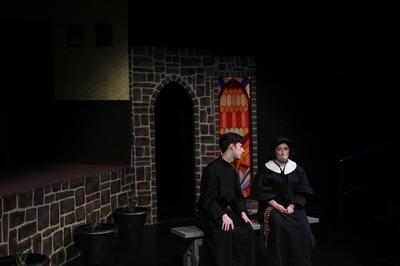 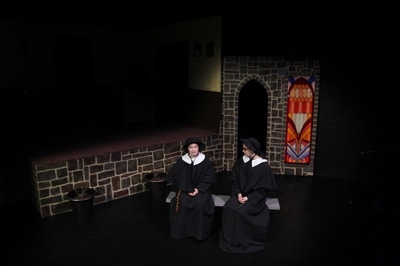 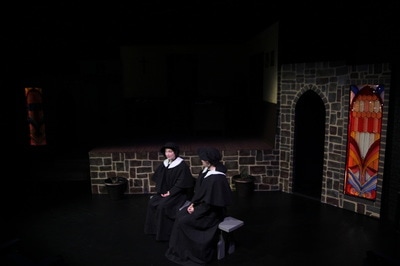