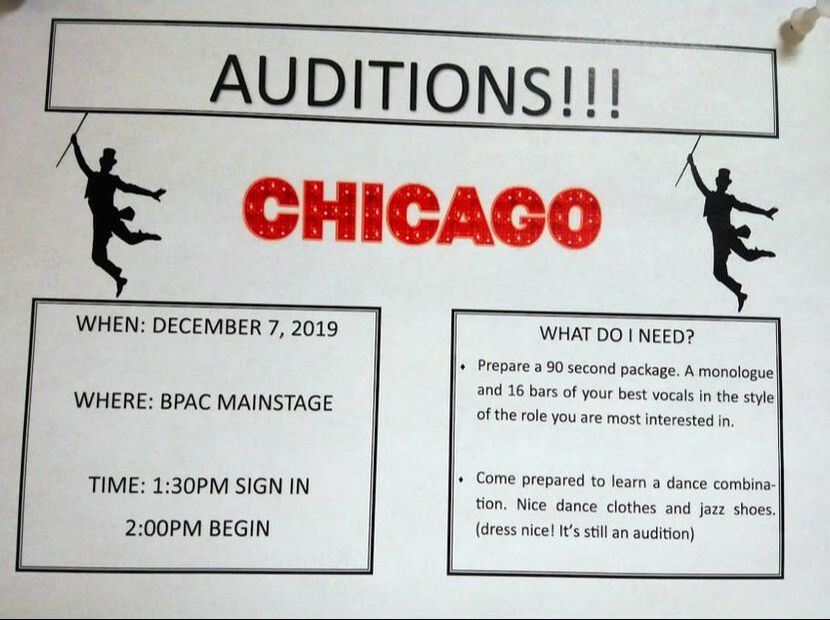 Wednesday, Dec. 4th
Joe's concept is "Vaudeville meets Art Deco".  The way we are interpreting that through costumes is that the whole show will be set in the late Twenties and reflect fashions of that time.  However, any scene with dialogue and no big dance number will be treated as happening in the real world and will be costumed as such: matte fabrics, natural colors, ordinary clothes; but any scene with a big splashy dance number will be costumed in shiny fabrics, bright colors, and Deco inspired "costumes".  Specifics that were agreed upon today are:

1. 7 female chorus members: provide their own 3" black character shoes preferably T-straps, will wear flesh colored tights and leotards as a second skin.  Over that will be black fishnet stockings attached either by garter belt or garters. All other costumes will be worn over this base.
2. 7 male chorus members: provide their own black hard-soled jazz shoes, will wear black socks, wide-legged pants, long sleeved shirts with white collars and french cuffs, sleeve garters, suspenders, and ties as a base costume.  Vests, hats, etc. will be used as pieces to indicate other characters.  The reporters will all wear sweater vests.
3. Ensemble for "All that Jazz" will be dressed as sexily as we can get away with, but not trashy and no midriffs showing.
4. Girls ensemble will wear striped prison dresses that we will have to build for "Cell Block Tango".
5.  Girls ensemble will need 12 giant pink ostrich feather fans for "All I Care About is Love" and matching costumes.
6.  Boys ensemble will need white tie and tails for "Roxie". Roxie will wear an Art Deco inspired dress for that number.
7. ​Billy Flynn will get a new 3 piece suit, two tone wingtip shoes, and a hat.
8. Amos will always be in regular clothing except for maybe "Mr. Cellophane", we're still discussing.
9. Mary Sunshine will be performed straight rather than as a drag queen.  If we don't have a male capable of the singing, Joe is willing to cast a female to Victor/Victoria it.
10. Mama Morton will be in a prison guard dress the whole show, unless we give her something more Deco costume-y for "Mama".

We had a costume specific production meeting during finals week that lasted four hours.  We fine-tuned the costume choices in regards to Roxie's numbers to make the vaudeville part of the concept more apparent.  Velma is clearly the Burlesque character and will get all the glitzy costumes; Roxie is the vaudeville character and her numbers will reflect that, including Amos' "Mr. Cellophane" number.  Only at the end of the show will Roxie become more like Velma and get the glitzy burlesque costumes, once they unite as a double act.

We made some more changes: